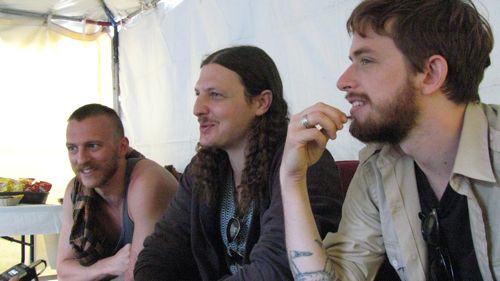 Meghan: This is Meghan interviewing Yeasayer for SomaFM. Why don't you guys introduce yourselves and let me know what you play.

Luke: Hey I'm Luke. I play the drums, various samplers and singing and such.

Meghan: So you guys are from Portland, right?

Ira: No. But that would be nice. Do your research!

Luke: I heard it's nice there.

Meghan: I did! My notes are back at the booth, I swear! Is it Seattle then? I know it's the Pacific Northwest.

Meghan: Oh you're from Brooklyn! Oh my god, I'm so sorry.

Ira: By way of Portland and Seattle.

Meghan: It's not my fault you guys move around so much.

Ira: That's where our minds live... But we live in Brooklyn.

Meghan: ok. How are you liking the West Coast?

Luke: I mostly like Portland and Seattle but San Francisco's ok.

Ira: Portland and Seattle are way sweeter than San Francisco.

Meghan: Yeah I hear it's really nice there.

Meghan: That's a good way to typify this, yeah. I'm sorry for the flub.

Ira: We just wanted to plug Google. Great company. It's a new company.

Chris: You can Google us.

Meghan: I have in the past. Look what good it did me. So do you guys tour a lot? Is this kinda your first national tour or have you been around the block a couple of times?

Ira: No. Through a variety of tours we've basically been on the road — our first album, our only album came out in October - and we pretty much have been on the road since before that and after that. In the States. We've done a lot of stuff in Europe. We're huge in Norway.

Luke: We're bigger in Norway than we are...

Ira: In Portland and Seattle.

Meghan: That should change.

Meghan: I hope that goes well for you. What's the album that you just put out?

Ira: It's called All Hour Cymbals and it's on the label We Are Free.

Meghan: And can you tell me a little bit about recording, writing, producing? What happened there?

Merin: Wait, I have a question!

Meghan: Ok Merin's got a question.

Merin: Can you do any creative work when you're on the road or are you too tired from running around? Can you still write and think of fresh things or does it take all your energy?

Ira: Yeah. I think the fact that we can work on stuff on our own laptops or whatever nerdy things is actually one of the things that keep us sane during a tour. So we try and work as much as possible. It's not the sort of thing like "Hey guys! Check out this new riff man!"

Meghan: Not that that's a bad thing.

Ira: It's a little more like "Ah, finally. I can be in the van and put my headphones on. I don't have to talk to these guys for the next hour."

Luke: [gestures at a spot on Ira's knee] Did you burn this putting on the iron-on patch on underneath there? Is that what that is?

Luke: I just noticed that while you were talking. Sorry.

Chris: We do stuff like that. Iron-on patches. Popsicle sticks.

Ira: Oh my god what was that? I think somebody just got electrocuted on the stage.

Meghan: I hope not.

Luke: That was the stage spinning.

Ira: They should get some WD-40 on that thing.

Meghan: So how did you guys all meet?

Luke: It's an all-inclusive bar so you know...

Meghan: I hear the singles scene in Brooklyn is pretty hoppin'.

Chris: Team up for a while and if the sex thing doesn't work out you start a band!

Meghan: There you go! That's a positive outlook. I like that.

Luke: So the sex thing didn't work out, as you can see.

Ira: He's the positive one.

Meghan: He's the happy guy? And you guys are all kinda bummed?

Meghan: Aw, I'm sorry. You've just come to sunny California. That should cheer you up a little bit.

Ira: Yeah, yeah. We were just in England so anything besides that is cheery!

Chris: We've already been swimming, hot tub. We already had an In-n-Out burger.

Ira: Is it only in California?

Luke: I think so.

Meghan: No they also have locations in Arizona...

Chris: In Seattle and Portland they have them. I remember growing up...

Ira: On the mean streets of Portland...

Meghan: Yes. They're both on the East coast. They're the same thing.

Ira: I was raised on a lobster boat.

Meghan: How do you feel that effects your music?

Ira: I think it helps me communicate with the common man.

Luke: Sea shanties and what not.

Ira: To this day I can't look a lobster in the eye without getting a tear.

Meghan: But I'm sure that gives you a really large following in Maine, right?

Ira: We're actually playing Maine for the first time in... ever. In the fall, I think. And I'm pretty excited about it. It's a beautiful state.

Meghan: Are you guys doing a big tour?

Ira: Theres parts of the country that get blacked out. Florida a lot of times gets blacked out. We're doing a tour down there.

Ira: The Mid-West oddly enough, doesn't get blacked out.

Luke: We're not going to Florida!

Chris: Are we touring in Florida? When is that?

Luke: Are you touring in Florida?

Ira: I think we are.

Ira: They're trying to set something up. I'm touring in Florida.

Meghan: And these guys are staying home in Brooklyn.

Luke: Are you visiting your grandparents in Florida? That's not like touring.

Chris: Do an open-mic while you're down there.

Chris: Play some old folks homes while you're down there.

Ira: It's gonna be fresh. It wouldn't be the first time. I've done that before. I used to be on the old folks home circuit.

Meghan: Oh yeah? How'd you get into that?

Chris: He was dating an 85 year old woman.

Meghan: Did you meet her at the same singles bar in Brooklyn?

Chris: He met her at the singles bar. Yeah, yeah. Unfortunately for him, the band didn't work out. But the sex was great.

Ira: You know, Ingrid loved me. And I loved her.

Luke: Right up until the end.

Meghan: And she was loaded?

Ira: No she wasn't, actually. That was the odd thing.

Luke: She was loaded after you got done with her.

Merin: Did you guys have to drive from LA yesterday?

Merin: Do you fly into LA?

Ira: No, we drive everywhere. We're kinda like the Big Bopper.

Chris: Europe is pretty close actually. Europe is just like the North-East of the US.

Ira: I think she means getting there.

Chris: Oh, getting there. We take a Hover-Craft.

Meghan: You told me you drive everywhere. I'm confused.

Chris: Well we drive back and forth in the Hover-Craft.

Meghan: Do you guys have any crazy touring stories?

Ira: None that we can say out loud.

Chris: If sleeping with 85 year old women and Hover-Crafts isn't crazy enough... I'm sorry I don't have anything better than that.

Ira: How much more do you want? We just keep giving and you just take take take!

Meghan: I'm a greedy person, what can I say?

Meghan: I'm glad you guys can accept me the way I am.

Chris: Now I can't hear anything. I just hear bass.

Meghan: Alright, I think that's all I need from you. Unless there's anything you'd like to share with the listeners.

Luke: I think I've shared way too much.

Merin: We're gonna broadcast this live in like one minute. So if there's anything you wanna say to people they can hear it on the Internet just now.

Luke: A little warning beforehand might be a good idea...

Meghan: You could tell people to come see your set, maybe?

Chris: If it's broadcasting right now by the time they get down here...

Ira: Try out the Google! It's pretty cool.