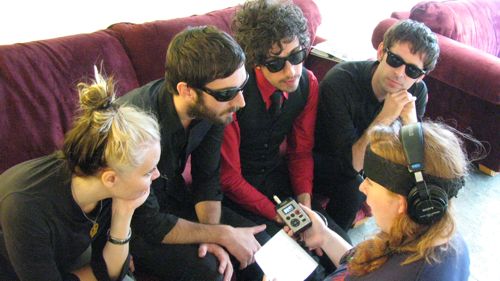 Meghan: This is Meghan and I'm here with the Duke Spirit for SomaFM. To start off with, why don't you guys introduce yourself and tell me what you play.

Leila: My name is Leila and I sing.

Meghan: You guys are all so remarkably British, I like it. So tell me how you guys met.

Luke: Well we've known each other for a long time, some of us went to college together, uh we kind of formed about 5 years ago. We sort of came out the ashes of another band, formed then and made our first EP 5 years ago.

Meghan: Did you guys get a pretty big local following before you branched out to States tours and UK tours or was it like you met and started going for it?

Luke: We didn't come to the states until about three years ago so yeah we spent a lot of time touring the UK to start with and then we signed a bigger record deal and then we could come over here. But yeah, it is kind of important to us to play as much as we could and build up a following that way, so we've done a lot of touring.

Meghan: Could you tell me a little bit about writing, recording, producing?

Olly: We recorded it in America we recorded it in Joshua Tree in California and we worked with Chris Goss from, uh, sort of the desert.. He's kind of the god of desert stoner rock if you like and he's produced Queens of the Stone Age and Kyuss so we spent two months in a nice.. yeah just in the middle of the desert recording the album.

Meghan: Is that the first time you guys worked with a major producer?

Olly: No no, on the last album we worked on we worked with Float um, which was another really great experience and uh...

Meghan: And how do you feel things have changed since you recorded "Cuts Across the Land"?

Olly: Well, we've had time to become a band especially live because prior to recording "Cuts Across the Land" we hadn't done a lot of touring and so the difference was that really we actually become a better union, better musicians...

Meghan: So you guys find you grow more on tour than you do in the studio? Do you prefer one to the other, touring or studio?

Olly: Well, I really like touring but they're different. They're both great but in different ways.

Luke: Yeah, I mean um, you can't really compare them. We've spent more time touring than we have in the studio so I have only made any two records so that's something that we've got more growing to do, there's more room to grow when it comes to making records. Touring we're all pros at.

Leila: We need to address the balance a little bit more and spend a bit more time twiddling buttons and making noise.

Meghan: Um, you guys have some pretty interesting instruments that you play, who plays the glockenspiel?

Olly: I play the glockenspiel.

Meghan: and who plays the... is that farfisa? Am I pronouncing that correctly?

Luke: Farfisa, yeah that's just like an old 60's organ. Yeah I mean that's the one thing we kind of like to experiment with a little bit just so that we're not... Just to use a different sound there's no reason why a rock band can't use a lot of different instruments. We use something called an autoharp as well, which is like a multi-stringed kind of acoustic instrument played by folk artists, yeah we use that just to get that weird sounds in there.

Meghan: Where did you get the idea to use those different instruments?

Luke: I don't know, sometimes you just see them lying around in the studio and you pick them up and you think they're cool, um and just through other bands that we like, ya know, steal their ideas.

Leila: Because it's just an, uh, eclectic taste and a love of records from the recent past and the distant past because they always chasing after those cranky esoteric noises that you can't necessarily make yourself now with modern instruments so you go back and find old things like at thrift stores and garage sales and plug them in and they make a sort of horrible buzz that you combine with an electric guitar and it sounds great or something like that.

Meghan: Would you say that is one of your primary influences just stuff you find in garage sales and that sort of thing or do you have some local bands that influence your recording? 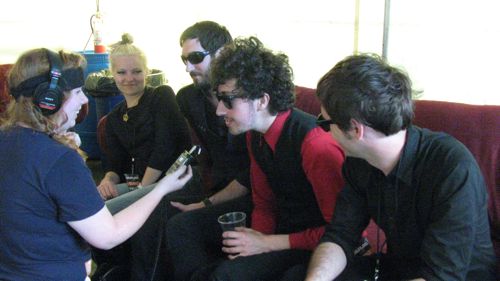 Meghan: So do you guys have any crazy touring stories or anything like that? Like something really wild that happened while you were touring in Australia or perhaps Germany? There's got to be something.

Luke: Not really, no

Olly: No not very many.

Leila: ...and we did fill up the bath and just like invited half of the gig back to like join us in this ridiculous sort of hot tub indoors experience and it was kind of sensual and kind of yeah... It was a certain sort of misdemeanor in the air that night.

Meghan: That's a good one. What would you guys be doing if you weren't playing and recording and touring with Duke Spirit?

Olly: I'd be in prison that'd be my full time occupation.

Toby: I'd probably be working in a gift shop.

Leila: Lady cabs, I know London streets pretty well. I'd be in this sort of gold car and it would be a brand of Lady Cabs taxi firm.

Toby: And Luke would be an Alice Cooper impersonator.

Luke: I do that anyway.

Leila: Only love and a sensual kiss. [kissing sounds]

Olly: Uh yeah, bring it on, anyone just come along.

Leila: What would you like to share with the listeners, Luke? Your venereal disease? You can edit that one out, of course he is a healthy wonderful young man. 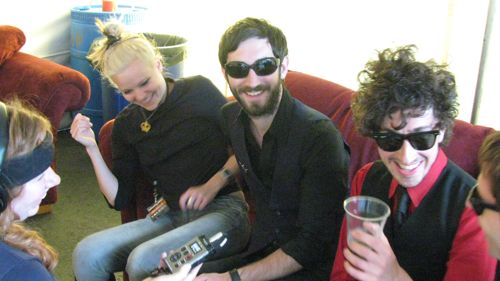 (all photos by Merin McDonell for SomaFM)

Music from The Duke Spirit