SomaFM's Guide to Iceland for Americans: Where to Eat and How to Drink Cheaply 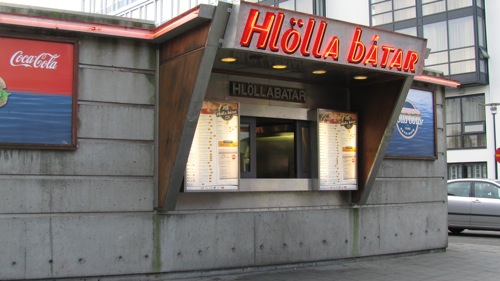 These often aren't really hot dogs. They're sandwiches, often lamb, with grilled onions and a flavorful sauce on them. 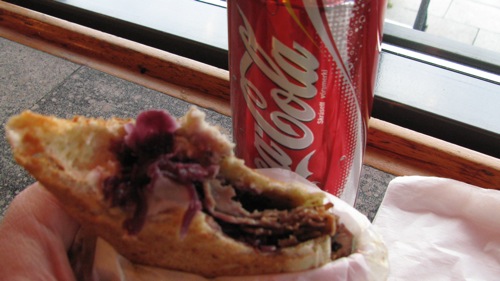 You can get one of these and a large Coke (with real sugar in it, not High Fructose Corn Syrup!) for about US$12. Very delicious, especially after a night out.

Last night, we had dinner at Vegamot, a bistro/bar in the city center. The decor is stylish, nordic modernist; the music was good and just loud enough that you could still talk but actively listen to the music as well. It was a combo of chill-house and downtempo, the food looked good so we sat down.

I was surprised when I saw how relatively affordable it was. Merin had the curry satay salad and I had the chicken enchiladas. US$42.35. Food was good, although the Enchiladas were a creative yet non-standard configuration (i.e. not rolled). A glass of wine each would have added another $20 to that, but we just had water. Ok, I know, that sounds insane by US standards (or European standards!) but food is really expensive in Iceland; generally 50%-100% more than food in the US or EU.

The day before we shared a large pizza at Eldsmiðjunnar, described to us as one of the best and most authentic pizza places in town. It's located a couple blocks off Skolavordustigur (the road that leads to the big church) in a residential block. The street level is the "to go" pickup location, as well as the kitchen. The dining room is upstairs.

Music wise, they were playing some hipster indie rock, one song was an indy/emo cover of Michael Jackson's "Billy Jean" that was really well done. The dining room is small, and wasn't very crowded the night we were there (a Tuesday). The take-out area was very busy, I guess a lot of people were eating at home. A big claim to fame is that Eldsmiðjunnar has an authentic pizza oven that was imported from Italy years ago, and was the first authentic pizza in Reykjavik.

With a Viking (the local beer) each, it cost US$54.32. It was a real pizza, not as good as the best I've had in Italy, or not as good as Pizzeria Delfina in San Francisco, but definitely a good pie and better than you'll find in many towns in the US. Still, that gives you a price check. Comporable Pizza in San Francisco would have been $30-35 with two beers.

Located near the harbor, Burgerjoint is delicious and relatively inexpensive. (Unfortunately, nothing is truly inexpensive in Iceland.) 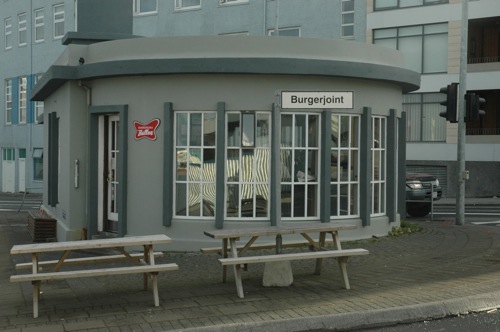 Prices were in the US$6.50-9.50 for a couple of pieces of batter coated fish. The fish was good, but it seemed too oily. I've heard that this is hit or miss, depending on if the owners are working that night. For about US$3.75 you can get their organic fried potatoes, which were quite enjoyable. 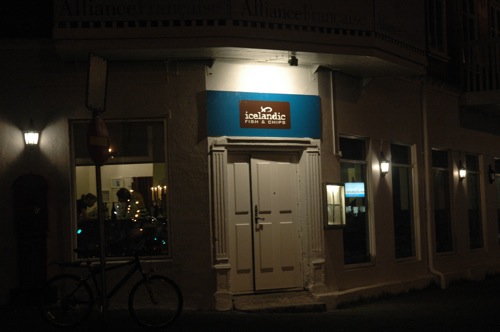 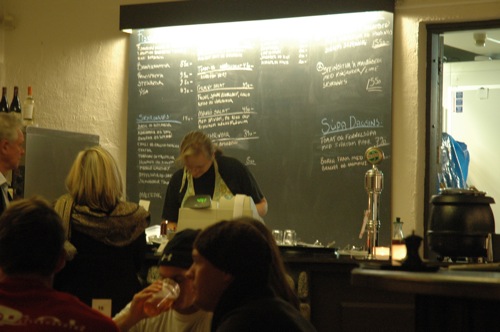 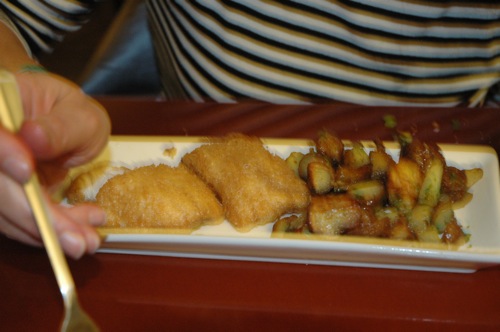 More in the Reykjavik food blog GastroShark's Review of Icelandic Fish and Chips.

We happened on Bakarí Sandholt for the first time right after they closed... and couldn't wait to come back the next morning. And delicious it was. We got a loaf of bread to bring back to our room to make inexpensive sandwiches; and we got some pastries to snack on. 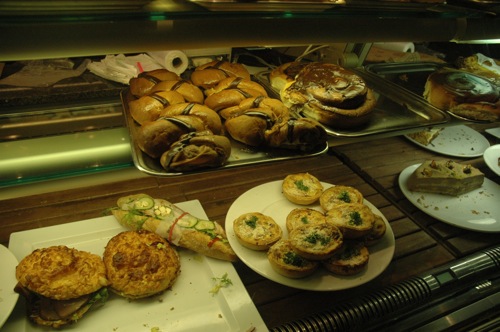 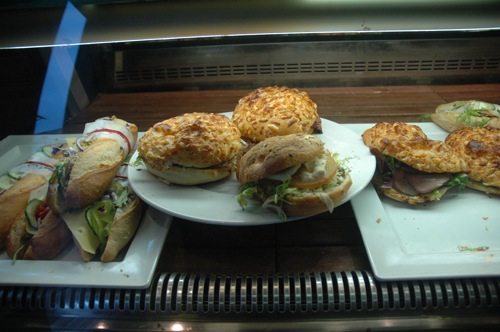 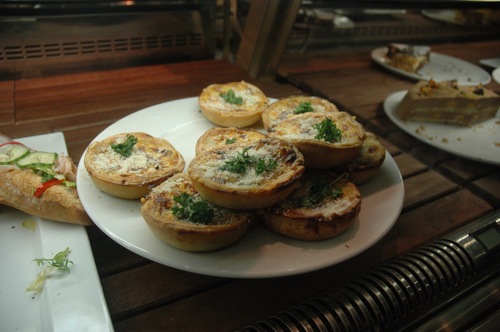 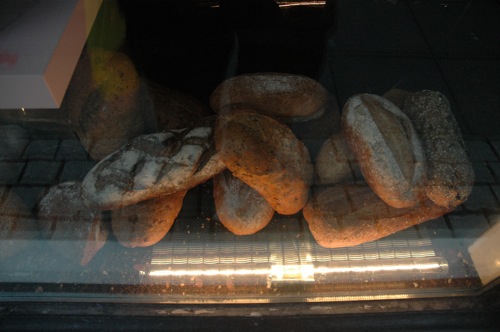 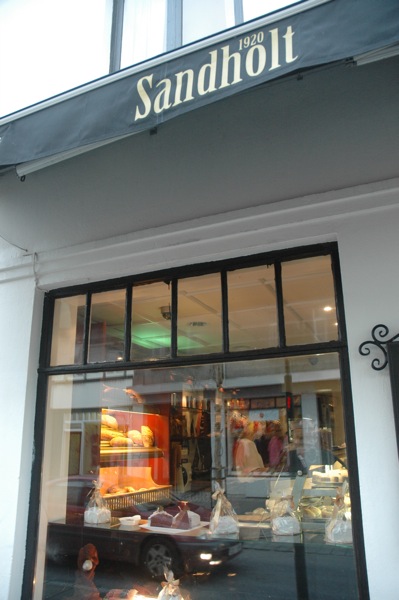 If you want more opinions, Trip Advisor has a lot of reviews of 83 Reykjavik restaurants.

I won't even go into the cocktail prices here... in the land of the $10 beer, the $13 "baby shot", and the $16-20 cocktail you realize that people do a lot of drinking at home before they go out... luckily there is lots of housing close to the city center so you can live near the action and not have to drive.

Hopefully you went to the Duty Free store at the airport, and brought in your allowance of alcoholic beverages. Here's what each person is allowed:

Personally, I think you get the most bang for your buck bringing in a 1L bottle of spirits that's at least 80 proof, and a bottle of Port or similar fortified wine with up to 25% alcohol.

Of course, if you run out, you can go to the state-run liquor store, Vinbudin. They have a really nice store in the city centre at Austurstræti 10a (near Aoalstraeti). But you'll be paying the tax of aproximate US$20 per litre of 80 proof or higher. (Wine is about $7 per bottle in taxes.)

Some common US brands are not available, but Eurpoean brands are well represented. But they have lots of Scotch, a decent selection of Gins and Vodka. But only 2 brands of Tequilla that I've never heard of. For a price comparison: a 700ml bottle of Jack Daniels goes for $45. That's about twice what you'd expect to pay in the US. Reyka Vodka, produced locally, is about US$41 in Iceland, compared to $27 a bottle here. (If you would have bought it at the Duty Free shop at the Airport, it's only $19 for a 1 Litre bottle!)

If you're a wine connoisseur, I suggest checking out GastroShark's Best Affordable Wines stocked by Vinbudin.

Don't think you can save money by bringing your own liquor from the US. When we contacted the Reykjavik Customs Office, they told us to expect a duty of 3500 ISK or $38 per litre above the allowance. That seems really high!

The high drink prices have one positive side-effect: people coming to music venues more for the music and less for the drinking. When a band is playing, people are watching and listening... not ignoring them like often happens in US clubs.