It's Wednesday. The sun hasn't gone down yet. We grab some dinner and head out to our first stop. 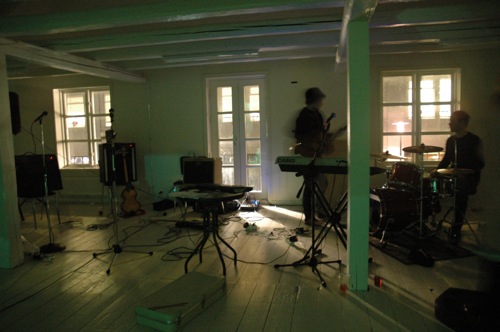 We arrived at Organ a little late and by the time we figured out where the "second floor" was, we had missed seeing Seabear, we missed the free Finlandia Vodka, but we got there in time to catch a showing of some of the short films premiering in the new edition of Rafskinna DVD Magazine. We did catch Skakkamanage in a very intimate setting (albeit with bad lighting), which was good because we missed their big show at NASA later. 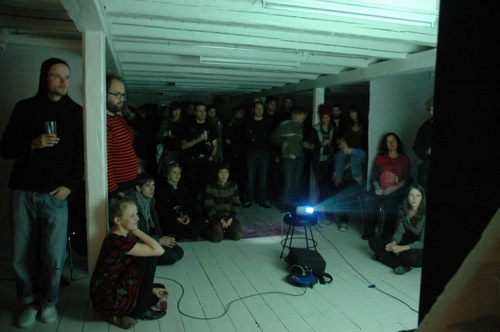 I was a little nervous because we went to an off-cenue pre-party at Organ on the "second floor", a sort of loft space with just a bunch of bright florescent lights, so no real vibe. (Note to the nice people at Finlandia: bring more bottles next time!) 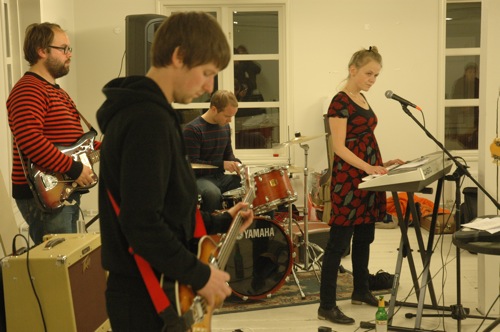 The music I've heard so far has been very good. The Reykjavik music scene is very good; I'm looking forward to what we'll hear in the next few days.

Two bands who I really liked tonight both have a lot in common: they mix "indie rock" (e.g. guitars and emotion-laden vocals) with electronics. It's the kind of music that's inspired our new Digitalis channel.

Icelandic bands do this really well. Bjrk is an obvious one to point out. Mm is another. Emily Torrini. You get the idea. They're really into this fusion of rock and electronica over here, and tonight I heard a couple of bands that I really liked and we'll be featuring on the new channel. 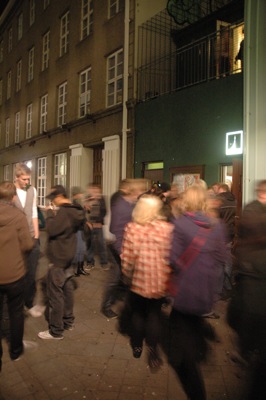 We get to NASA and there is a good sized crowd outside. By later in the week, we'll think this was a tiny crowd compared to the lines to get in on Friday and Saturday night.

NASA is a newer venue, and a great one. Although it looks tiny from the front, the venue is actually quite large inside, with raised areas wrapping around the sides affording good views for many. The sound system is most impressive, possibly the best bass in Reykjavik.

The members of Soundspell are all very young, but they have a mature sense of musicianship. Their guitar player also plays synths, often at the same time. They have another keyboard player who mostly plays piano and a few synths. You can tell a log goes into the writing of their songs, they're not just throwing words and riffs together. A simplistic description of them would be Jeff Buckley meets Radiohead, but it's more than that.

And they can rock when they need to.

Listen to some of their music here, they'll be back for Airwaves 2008.

I'm not sure how to describe these guys except that they are a little less electronic than Soundspell, but I'm sure they all grew up listening to progressive rock. Their songs are catchy yet complex, backed by rock-style beats that make you want to dance like a good house track. Some people call this "post rock", but it's a little different than your traditional post-rock fare: more danceable for one thing.

Listen to some of their music here

That's the 2 bands that impressed me tonight.

NASA is a good space; the sound quality was excellent, and in general they mix it not too loud but just about right. Bring earplugs just in case... because the sound system is powerful (as we found out later in the week when Gusgus played). 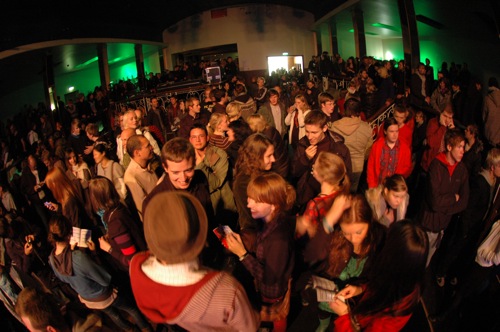 Late Wednesday night, and the weather has taken a slight turn for the worse. It's started raining, and the wind is now blowing hard. Reykjavik is a walking town, and the city center is small but still, walking 4 blocks in 30 degree weather with 25 mile an hour winds is pretty harsh at first, but don't worry, you'll acclimate.

Next: Eating in Reykjavik