Iceland Airwaves 2008 is Over, but the memories live on

The weather in Reyjkavik has waited until today to turn really nasty: strong, freezing winds from the north; snow flurries; grey skies and not much visibility, and below freezing temperatures. Otherwise, for the festival, the weather has been pretty decent. We return to the US shortly for CMJ in New York, so today is the day of editing the videos and choosing the best pictures shot over the last week here.

Sunday night, there was the annual "Secret Closing Show" at Nasa. Although this year there was no secret international act that played (last year it was UK's Magic Glasses). The headline performance of the night was DJ Margeir and 10 members of the Icelandic Symphony Orchestra conducted by Samuel Samuelsson. We saw Samuelsson last year conducting hist "Big Band" (e.g. mostly horns in the classic Big Band style) doing covers of classic funk songs.

Members of the Icelandic Symphony Orchestra conducted by Samuel Samuelsson

The opening act was Fjallabræður, a twenty or more member mens choir backed with a 4-piece rock band. Fjallabræður comes from "a small Icelandic fishing town" and they say that half of the residents are in the group. They're sweet, sincere and were really great.

There were also performances by youth-rockers Retro Stefson (I swear some of the members don't seem over 12), Boys In a Band, Circus-inspired death metal Dr. Spock. Fjallabræður and DJ Margeir's Symphony were the best. 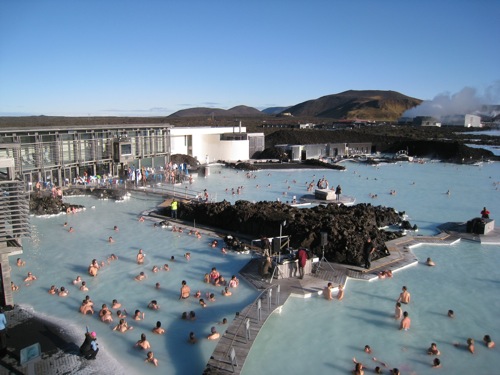 The Blue Lagoon is a a warm, milky-blue geothermal pool. The color comes from silica that's dissolved in the water; the silica is actually white but it reflects the color of the sky, which gives it the blue color.

The water that fills the Blue Lagoon is runoff from the nearby Geothermal plant. To generate steam, they pump seawater into the earth's crust, which then gets super heated to steam to turn the turbines and generate power. Excess water bubbles back up, with new minerals. This excess water flows into the lava fields to create the Blue Lagoon. 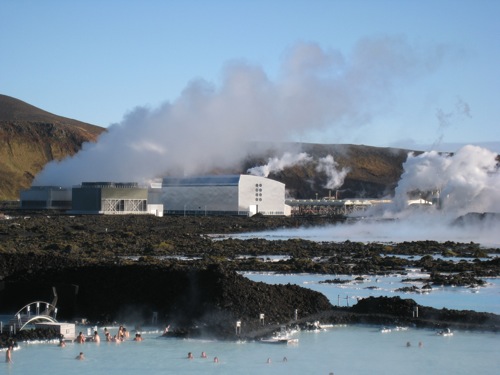 The air is cold, for example today it was about 36 degrees Farenheit, but the water is hot - depending on where in the pool you are between 98 and 106 degrees F. There is constantly steam coming off the pool. 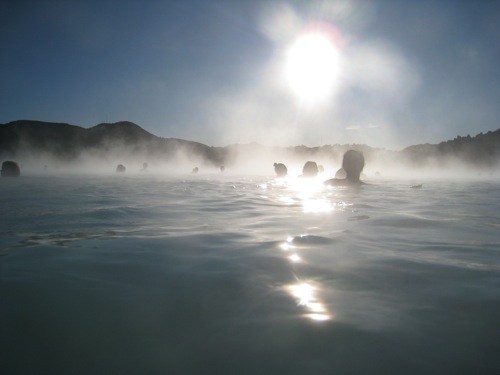 DJ Margeir plays a mix of techno and throwing in a few house classics, and gives people a time to wind down every so often by throwing in a lounge or retro track. 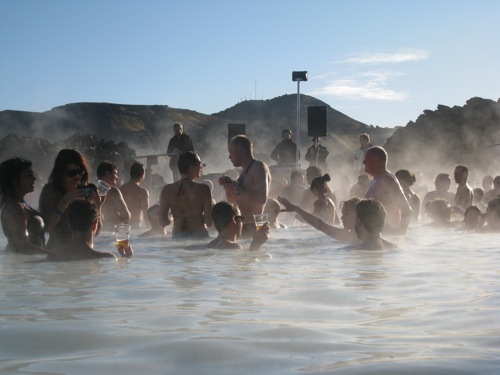 It's hard to believe that this pool party is happening in almost freezing weather, but the water is so warm, no one notices! 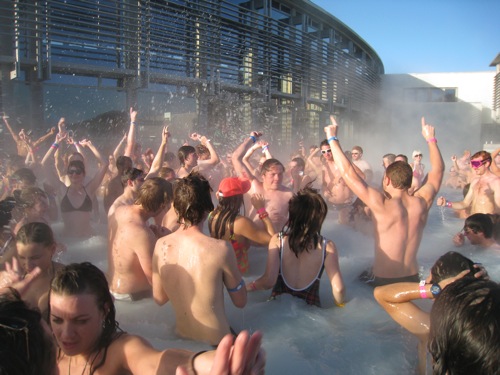 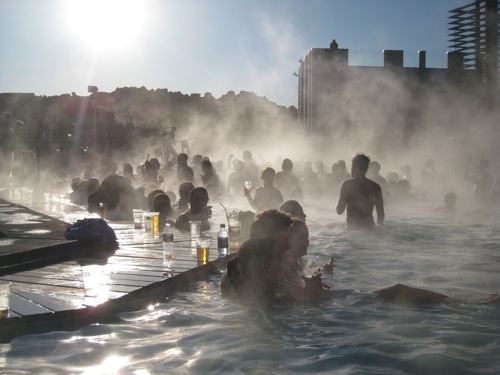 The Blue Lagoon any time is an incredible experience. But during Airwaves, it's even more fun becasue of the music, and the fact that they allow you to bring your drinks into the areas near the DJs. Hot springs and spa meets nightclub!

The weather has taken a turn for the worse. Well, worse if you think that colder, windy and more rainy is worse. But this is Iceland, and Icelanders take these things in stride. Wear layers, long underwear, a sweater or coat, and a windbreaker on top of that, maybe a scarf, and a wool cap. You can always take some of it off inside.

We're making our final plans for which bands to see tonight, but for sure we're going to check out the Bedroom Communities showcase at Iðnó which is located adjacent to the "Pond". Some of the artists we want to see are: Ben Frost, Amiina/Kippi Kanínus, Nico Muhly (US), Valgeir Sigurðsson and Final Fantasy (CA).

And don't forget about Seabear at the Reykjavik Art Museum at 10:15 pm tonight, and after 1am or so we'll head over to Nasa to see UltraMegaTechnoBandidStefan perform on a big stage.

Rusty on the hotel balconly braving the elements. Moments after this photo was taken, it began hailing.

Tonight, we ran around and saw Soundspell, Disa, Olafur Arnalds, Ghost and FM Belfast. We got a late start (time flies here) and caught the last half of Soundspell.

We first saw Soundspell last year, they're always good to see. They tried out a lot of new material, so hopefully a new CD is coming soon. (We play Soundspell on Digitalis)

We knew that we'd like Olafur Arnalds performance when they brought out 5 red chairs. Not just any chairs, these chairs looked special, and they would soon be filled with a very talented string quartet.

Disa was a young singer, under 20 years old, and she performed with a small band of keyboards, guitar, bass and drums. The music style was reminiscent of th early Sugarcubes.

Off to Tunglið to catch Ghost

Ghost got to their set late due to a type in the Airwaves directory- their show was rushed and not as nice as when we caught their small show at the bookstore the other day. Still, they show a lot of promise.

But the band that everyone was waiting for at Tunglið was FM Belfast.

FM Belfast is a huge local favorite. They're the band that everyone is friends with. 2/3rds of the audience was singing along with their songs and knew every word. They're an electro-pop act that's mostly a DJ/Laptop Performer and a bunch of vocalists / dancers.

Today was a beautiful day in Reykjavik for the start of Iceland Airwaves. Although as I'm writing, the rain has begun to fall- but the sliver lining to that cloud is that the rain makes it warmer than when it's clear. So it's a blessing and a curse.

Lots of people have arrived today. The town is filling up with music lovers, and everyone seems happy and excited.

The real event kicks off at 7:30pm tonight. In addition to all the "on-venue" or official events that make up Iceland Airwaves, there are also a lot of "off venue" performances. These are often at bookstores, coffee houses and smaller bars, and are usually very intimate.

I caught band Ghost doing an in-store show at the bookstore adjacent to our hotel. They have a "real show" tomorrow night before FM Belfast at Tunglið. I got there right as they were finishing, but I really liked them and can't wait to play more of their stuff for you.

We arrived a bit early to Tunglið (which means "The Moon" and is pronounced "Toon-Le-Oh") and the band playing was much too hard for our taste, so we walked next door to Organ to see who was playing. "Perla" was the band, and from the outside as we walked it, they seemed downtempo rock, but then erupted into full-bore death metal; albeit musically complex, and only for a while. Not really our kind of music, but the sort of thing you hear and say, wow, if I liked this kind of music these guys would be great. (And we mean that as a compliment.)

Back to Tunglið and an awesome set tonight by Icelandic band Borko. Don't let the silly-sounding name fool you, these people make beautiful music, mixing laptop electronica, trumpet, guitar, bass and drums. You'll be hearing more from them on Digitalis.

They were followed by local favorites Benni Hemm Hemm who did a good show, but nothing too surprising (we're scheduled to interview Benni tomorrow). The show was packed, and we watched it from the back rather than fight our way to the stage.

Later, "Hjaltalin" did a really good set at "The Moon". You don't find too many rock bands that feature Oboe and Violin, but they pull it off perfectly- their instrumentation never sounds gimmicky.

We left shortly after local favorites Retro Stefson went on, because frankly Tunglið was too crowded and you couldn't move, and there was a line a block long to get in outside. We figured we'd check out the band playing the "press party" at B5, "UltraMegaTechnoBandidStefan", another Icelandic band.

UltraMegaTechnoBandidStefan put on an Amazing show, and I think that the oldest member of the band was 19. Perhaps I exaggerate. But only about their youth, not about what a great show they put on. Imagine Kraftwerk re-incarnated as teenagers channeling the Sex Pistols and you might get these guys.

We'll have some videos uploaded tomorrow so you can see for yourself.

Tomorrow night: we'll probably see Soundspell, FM Belfast, Ghost, Gusgus, and some others. See you there!

In spite of economical difficulties in Iceland at the moment the Iceland Airwaves festival will take place next week just like it has done for the past 10 year. The economical crisis does not affect the planning and promoting of the festival. Ticket sales have been going well and with the festival less than one week away, there are only about 700 tickets still available. Among the bands playing the festival this year are CSS, Vampire weekend, Junior boys, White denim, Boy Crisis, Simian Mobile disco, Pnau, Florence and the Machine and the Young Knives

(We can assure you that Reykjavik is operating as normal, ATMs work, credit cards accepted, stores are well stocked and restaurants open for business.)

You can purchase tickets online from Midi.is or you can also purchase them from Icelandic Airlines, but the procedure is a little more complicated.

Are you going to Iceland Airwaves next week? Be sure to check out our 2007 coverage to help get you ready for this year!

In Reykjavik, we pick up our festival passes and get to know the town a little bit.

It's Wednesday night and Airwaves 2007 begins! We go to a opening pre-party and later check out different bands playing at NASA, one of the best venues in Reykjavik.

SomaFM's guide to cost-effective eating and drinking during Iceland Airwaves

A short photo retrospective of our time at Iceland Airwaves 2007.

Reykjavik Webcams: Three views from the Icelandic Meteorological Office, several views from Reykjavik City Center (the camera pans around every 60 seconds), and one more view of Reykjavik

Here are links to get more music from some of the Iceland Airwaves artists we've seen:

Music from The Teenagers