Rusty Hodge is the founder of SomaFM as well as our General Manager and Program Director. He also is the music director for Groove Salad, Secret Agent and Drone Zone, and contributes to Cliqhop.

He got started in radio during high school by operating a neighborhood micropower station, and later started producing daily programs and making them accessible over a phone hotline. Rusty got involved with computers when, while managing his college radio station in the early '80s, he developed software on an Apple II for handling station playlists. His professional experience includes work at radio stations in the Los Angeles area, developing software for broadcasters, multimedia, and founding Hodge Interactive to put radio and TV stations on the web. It was only natural that eventually he would start his own internet radio station.

Rusty has been collecting records since the mid '70s, bought his first ambient record in the '80s, and latched onto electronic ambient music right away when it started first appearing in the early '90s. Many of the records in his collection are now out of print and extremely hard to find.

With the launch of SomaFM in 2000, Rusty's dream of his own station became a reality. 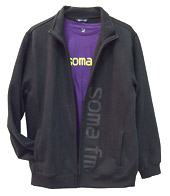 Our new Stealth Unhoodie, a black-on-black heavyweight fleece zip sweatshirt. A hoodie without the hood.


SomaFM is commercial-free radio supported entirely by you! With a $50 donation, you get a SomaFM tshirt!

If you can't afford $50, your support of any amount helps keep us on the air, or use our simple automatic monthly program: