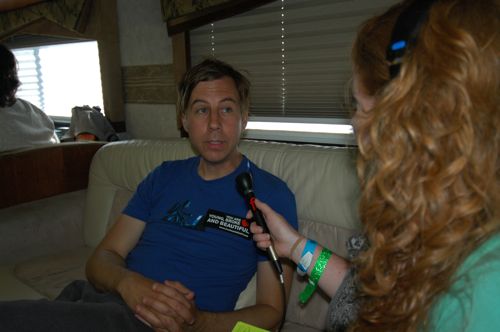 Meghan: This is Meghan with John Vanderslice at Treasure Island. How are you, John?

John Vanderslice: I'm doing great, Meghan. How are you?

Meghan: I'm doing well. How was your set earlier today?

John Vanderslice: It was really fun. The sound was great and usually, sound at festivals, you just gotta roll with the punches. It sounded totally coherent on stage, which is very rare.

Meghan: So do you like to play live sets more than you like to record? Do you have a preference there?

John Vanderslice: I would say that there's a chaos to playing live that's thrilling and there's an energy to being on tour that you get used to it and you need it in a certain part of your life. It's so directed and focused. It's the only time in your life that you're really doing music twenty-four hours a day. You can really shut out most things. But, being in the studio feels like it's permanent. That's kind of great, too. And I would say that being in the studio is more heartbreaking, because you can terrible days in the studio and you don't really have terrible days on tour. It can be difficult but it's really unusual that a show wouldn't feel good. But it's common that a day in the studio would seem fruitless and be terrifying.

Meghan: When you prepare for a live set, how do you pick which tracks you want to play?

John Vanderslice: That's a good question. We really wanted to play a lot of new songs today so we probably spent more time than usual thinking about it and we have a new drummer today which is fantastic because he played great. He's awesome, Mathias Bossey. He really wanted to play some songs that were in the set and so we just kind of thought more than usual. Usually I don't see the set until we go on because other people write it and I don't care. We know a lot of tunes. It feels great to not think about it and just see a list and you're like "Okay, cool, wow, we're going to play that first, why not?" Very rarely is there a tactical error in the setlist. I liked what those guys put together today.

Meghan: So you're originally from Gainesville, Florida, right? What made you decide to come out here?

John Vanderslice: I moved to California because my girlfriend at the time was living in Los Angeles and going to USC and I moved to L.A. Then I came up here to visit some friends and I just really fell in love with the city. I mean, it's pretty striking when you first show up here. It kind of blew me away. When I think about it... I was on the 101 driving North and right when you get into the city and you see those rows of attached houses and it's so weird looking. It just looks like no other place in the country. And then when you get into... there's so many hills and vantage points and hills and micro-climates and it's a kind of amazing place, really. 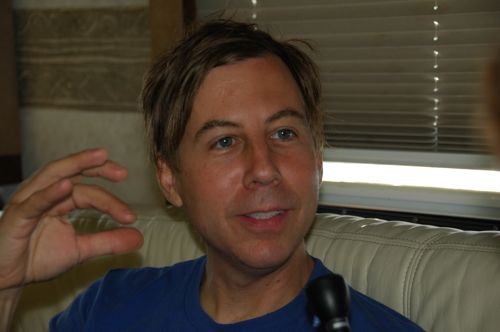 Meghan: You also run Tiny Telephone, if I'm not mistaken. You write, record music, and I hear you also take photos for a hobby.

Meghan: How do you balance those and when do you sleep?

John Vanderslice: Well, I'm pretty lazy. I know that's shocking. Isabel, aren't I a very lazy person? We're getting confirmation there. I think the main thing is that there was a point in my life that I decided I was only going to do the things that I wanted to do, like music.

John Vanderslice: Fun stuff. And so when you do that, ridiculous as it sounds, you kind of block out. It's not like I have other competing hobbies or interests. I'm not super-social. We don't really go to shows that often. I kind of stay in a lot. So when you block out all that time, you can get a lot of stuff done because there's not a lot of stuff competing. I don't go snowboarding... I'm sure you have crazy hobbies that take up time. What are your hobbies?

Meghan: I work and I go to school. I occasionally go to shows, and I read.

John Vanderslice: Work and school is heavy. That's pretty intense. And school, that's a lot of work. I would say I just dedicate all of my time a couple of things and there's always four hours a day free to do nothing.

Meghan: That's nice. What do you do during your nothing time?

John Vanderslice: Well, I'm kind of a television addict. I watch a lot of movies.

Meghan: What are your favorite shows?

John Vanderslice: I like "The Office." The American "Office." We watched "Fringe" the other night. We were totally disappointed. I didn't think it was that good. But I'm not a snob at all.

Meghan: You're not above watching the "O.C."

John Vanderslice: No, not at all. We like "House."

John Vanderslice: I'm a huge fan of movies. This wasn't a great movie last night, but we watched a movie on cable, "The River Wild" with Meryl Streep and Kevin Bacon, and it's a kind of corny, "Deliverance" —style soccer mom vengeful killing movie. I like cable. The Bill Maher show is good. I like movies. I have a recording thing in my house so I do a lot of recording at home. So it's kind of focused around my house.

Meghan: You mentioned that you're not very social but it seems like you're relatively well connected in the San Francisco Indie scene. Everybody that I've talked to says you're the nicest guy in the scene.

John Vanderslice: That's a shame. [laughter] No, it's a great thing. I take that back. It's fantastic that they're deluded. No, I'm normal. I'm probably as nice as anyone else. I don't have like, surface demons that control the conversation. Sometimes you'll be with musicians and there's a lot of intense stuff on the top. I can keep it down low enough where it's not...

Meghan: Normal people one on one.

Meghan: And support yourself on that.

John Vanderslice: And to try to have a personal life and try to stay sane and try to please your label and your bandmates and the mini-power structure you have around you. And to do it year after year, it'll fuck you up. Am I allowed to cuss?

John Vanderslice: When I met Tokyo Police Club I really wanted to meet them. I loved them, I think they're bad-asses. So I don't have any competitive thing with bands. The studio has helped me meet a lot of local bands, for sure. There's definitely two or three bands in every week. Four, five, six, seven, eight a month, sometimes. I meet bands. Also I'm serving them. I'm there to get them milk and water and suggest what microphone they should use on this or that so, you know, it's street-level stuff.

Meghan: So is there anybody you still get star-struck by?

John Vanderslice: There are bands that I meet that I'm very, very nervous to. I'm very nervous that they won't give a shit, not about meeting me personally, but meeting a fan. And it's tough, because some bands will be really, don't really care. Very few bands, especially now, with the Internets and the almost collapse of the major label scene and the power structure, bands now have to be very flexible and they have to be very respectful to everyone. Because you don't know if you're talking to some guy who runs Gorilla vs. Bear or not. You have to be normal. So that's really changed how bands are. I remember going up to bands when I was first going to shows at the beginning of the 90's and it was very common that the band would be just like "Who the fuck are you? Why are you standing here talking to me? Why are you talking to me off-stage right now?" I know that was common then. It's not common anymore. There are definitely many people that I'm very nervous to meet.

Meghan: Anyone in particular?

John Vanderslice: Well, we did a tour with Malkmus and I was nervous to meet Malkmus because he's a hero. A huge hero of mine, and I was a huge Pavement fan. So the first show, I'd never met him before and the first show that we played with him was in Minneapolis and you know, when he walks in the building, it's like, I've seen a lot of Pavement shows. I was nervous. But it happens all the time.

Meghan: Did he live up to the aura?

Meghan: I've heard that you coined the phrase "Sloppy Hi-Fi." Tell me a little bit about that.

John Vanderslice: Sloppy hi-fi is having a very expensive and tweaked out signal chain, great microphones, great compressor, and mic pre, but not being fussy about the way that you use these chains and systems of recording. You just try to get the performance on tape. You don't obsess on making things perfect, you don't dump things on a computer, you don't quantize or grid out drum tracks, you accept performance when it happens as it is, and you try to work quickly but the instruments and the equipment you are using are the best that you can afford. I think it makes for an interesting sounding album. It's loose, but it's hi-fi. And that is a great combination. 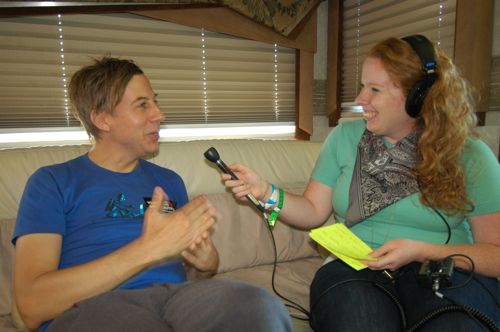 Thanks to Boost Mobile for the use of their bus for this interview.