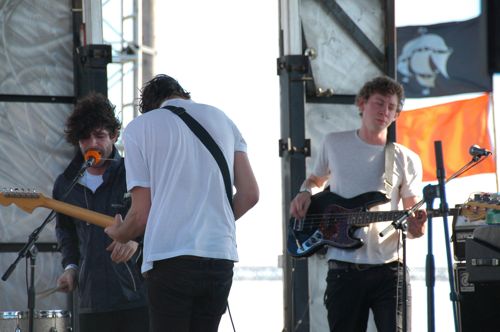 Meghan: This is Meghan, with Yannis from the Foals, at the Treasure Island music festival. So, Yannis can you introduce yourself and let me know what you play?

Yannis: I'm Yannis from Foals and I play guitar and I sing.

Meghan: So let's start off real simple. Where did you guys get the name?

Yannis: Our friend came up with it and he's from Oxford. We were all friends before we played music together and we used to prat around and get in trouble back home. So he described us like a bunch of foals, like stinky, smelly, and, you know...

Meghan: Okay, right on. And how did you guys all meet?

Yannis: All through different ways, really. Some of us went to school together. We've all known each other since like, fourteen, fifteen. Like, if you get interested in music and smoking pot and doing things that aren't of the straight and narrow you quite easily meet the similar people in Oxford. It's very, like, very segregated in terms of the academic world versus anything like countercultural...

Yannis: So that's how we met, basically. We just like...you know...and then the band formed out of other friendships and side projects and stuff. And that's generally what Oxford's like. It's quite free.

Meghan: So is the music scene there pretty small?

Yannis: It's pretty small. I mean, it's a small city. It's only a hundred thousand people. So yeah, but it's big, comparatively, to the population. And a lot of bands are content with just making music for each other in a small scene and just experimenting and having fun.

Meghan: Right on. And you and Jack worked together in the Edmund Fitzgerald a little while ago. Is that correct?

Meghan: Why did you guys decide to leave the band?

Yannis: We were like fifteen, we were only fifteen or sixteen, so it's not like, it's kind of weird, even. It was just a kind of after-school band. It wasn't, y'know...

Yannis: Yeah, yeah. It's funny that anyone even knows about it, really.

Meghan: Well, it's on your Wikipedia page.

Meghan: Are there any surviving recordings?

Yannis: Oh, there are, there are. We put out like some seven inches and stuff. Our friends put them out in Oxford. I don't know whether you can find them anymore, though. I haven't seen them for a while.

Meghan: I'm sure they're on Ebay.

Meghan: What made you guys decide to bring on all the new members and start Foals? Was it a really natural decision or was it like a forced, like a "We're going to do a new thing now"?

Yannis: No, it was pretty natural. Like, we just were playing instead of going out, we used to just play music with each other and stay in and listen to records, so it happened quite naturally. Edwin joined quite, kind of, like more tactically in a way. We definitely wanted somebody to play keyboards at some point. He'd never been in a band before, so we asked him to join. Because it seemed fun.

Meghan: And Dave Sitek, from TV On The Radio helped you produce Antidotes. How do you guys know him? Are you band buddies or...?

Yannis: We're not band buddies, I mean, we were massive fans of his work, like as a producer and we are massive fans of TV On The Radio. So when it came to having to make an album we wanted to work with somebody who we thought understood us and we felt like he did. He's an incredible producer. Yes, we just went out there and I think he'd heard some stuff he liked, what he had heard, and you know, we just went out.

Meghan: Where did you guys record the album?

Yannis: In his studio in Williamsburg.

Yannis: It was really cool. And we had members of Antibalas, who he's friends with, come down and put brass parts in. He expanded the way we look at music, massively.

Meghan: That's cool. And then the name of album is Antidote, right?

Meghan: And that means...well, tell me a little bit about why you chose that particular title.

Yannis: Well, it's a cure and all of the songs are kind of flawed in some way. Lyrically, it's all about mis-communication and not gaining satisfaction and stuff. So the record needs a cure. That was the reason why.

Meghan: Is there a particular issue that you're looking to cure with that album?

Meghan: Right on. You guys have been... you mentioned that you've been touring a lot recently. How do your live sets differ from all the recorded stuff for Antidotes?

Yannis: Our live sets are heavier and the vocals are worse.

Meghan: Is that a really important distinction for you or is it something that's just kind of like this is what we have to work with?

Yannis: No, we like, we really relish the idea of making records and that being a specific thing and then having a live show, that doesn't need to be totally faithful to the record. It can be something that's more chaotic and less conscious of itself. I like watching bands that are unconscious of themselves playing, almost. At least, it feels like that and that's the spectacle and you get lost in it. So hopefully we do something like that.

Meghan: That's cool. What time is your set today?

Meghan: It's like three or four, I think. Are you guys excited to play this particular festival?

Meghan: You guys have played a couple of festivals in the past, right?

Yannis: Uh-huh. We played a lot in the U.K. We haven't done so many American festivals, but we're really glad. We're pretty excited. We like a lot of the stuff in the lineup.

Meghan: Are you going to watch any sets later?

Yannis: Yeah, I'm going to watch Antibalas and TV On The Radio.

Meghan: Do you prefer big festivals to smaller things like headlining?

Yannis: Not really. I pretty much like being at home, most of the time. So festivals, I never went to one before we were in the band. And I don't think any of us had. We'd been to maybe one in Oxford that we'd played at in another band. So this whole summer's been pretty agoraphobic for us.

Meghan: Are you ready to go home and take a nap?

Yannis: It's not really that. It's just I find...well...yeah, I am kind of ready, yeah. [laughter] Ready to go home and have a shower and make another record.

Meghan: How much longer is the rest of your tour?

Meghan: Wow, so you won't be home until Christmas, right?

Yannis: Pretty much, but yeah, I mean, we're used to it now. We do really enjoy touring. I like the kind of oblivion of touring and getting to play to so many different people.

Meghan: Is there a particular show that you've played that is a favorite among the band? Was there one city that you were really excited about?

Yannis: We're excited about today and yesterday as well. In L.A. we played at the El Rey theater, day before yesterday. We really wanted to do that show because we were playing with Health as well. It was cool. We like playing at night indoors, basically.

Meghan: Rather than outside, in the daytime.

Yannis: I think that watching a band in sunlight can be quite a de-mystifying experience.

Meghan: It's not as powerful, right?

Yannis: Yeah, it just leaves less to the imagination, which is kind of a shame. Know what I mean?

Meghan: Yeah, I can understand that. It's definitely a true, true thing. So there's one particular festival I want to talk about, if you don't mind discussing it. You guys played Summer Case in Barcelona a while back and I read that there was a little bit of a dispute there.

Meghan: Can you tell me a little bit about that?

Yannis: Uh...well, I don't know. I just got in a fight with a friend. I already kind of talked about it...

Meghan: We don't have to discuss it if you don't want to.

Yannis: It's kind of boring. It's just that there was a fight and I stuck up for my friend and that's it. I had to do an official statement about everything. No, it's okay.

Meghan: But is that sort of group mentality, good ol' boys thing really important to Foals? Like, sticking up for you friends?

Yannis: I think that's important for any human being, isn't it?

Meghan: Does it bother you when people call you The Foals?

Meghan: Was it intentional that you left the 'the' out?

Yannis: It was intentional, I mean, yeah, there's no 'the,' I dunno. It wasn't really intentional I just think it sounds better.

Meghan: I'm inclined to agree. You mentioned earlier that you're working on a new record. Can you tell me a little bit about it?

Yannis: Yeah, we've been writing loops for the next record and that's generally how we write, really small sections of music. And then we're going to go back to Oxford and do the next record. Maybe record it out in the States. Everything's pretty loose, though.

Meghan: That's pretty far off in the future, right?

Yannis: Yeah, it is, what with touring and all.

Meghan: Do you guys write music first and then lyrics? Or does it kind of grow organically?

Yannis: Um...It grows organically but they're written separately from each other. So I'll be writing lyrics but not really with the songs in mind, as such. Up until now it's been like that. I think that from now on we'll try and make it more cohesive.

Meghan: Do you guys find a lot of time to write on the road? Is that how you are doing a lot of the writing for this new album?

Yannis: No, not really. We mainly play video games on the road. [chuckles]

Meghan: Which are your favorite games?

Yannis: It's not me that actually plays them, it's everyone else. That's why we get no writing done. I want to write but everyone else is...they play this game called "the Gran Turismo" or something. Some racing game.

Meghan: It's a racing game, right? What are some of your major influences?

Meghan: Do you have any kind of unexpected influences, like stuff your fans wouldn't expect you to listen to?

Yannis: Um...we listen to some songs of the pioneers, like Tumbleweed stuff. And we listen to folk music, as well. And classical music.

Meghan: Do you have any songs written for the new album yet or is it kinda just gonna happen when you get back there?

Yannis: No, no titles.

Meghan: That's really all the questions I have. Is there anything in particular that you want to talk about?

Meghan: Sounds good. Well, thank you very much for your time.