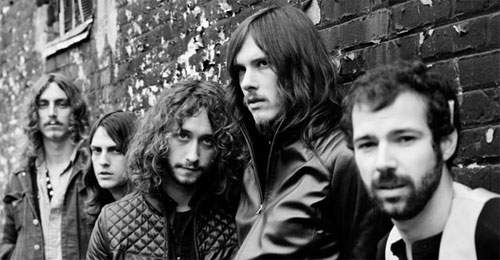 We caught up with the Parlor Mob backstage at Download Festival. The initial comparisons to Led Zeppelin ring true even when these guys aren't on stage; they recline on those tacky red couches with an ease you would expect from a group of classic rock legends. We get to chatting about their first national tour, New Jersey and a run in with Suge Knight.

Meghan: Could you all introduce yourselves and let me know what you play?

Meghan: Thanks guys. Where are you from to start things off?

Meghan: Ooh, very nice. How did you all meet?

Meghan: Is it all original members?

Meghan: So is this you guys' first big national tour or is there something you've done before?

Paul: This is our first national tour basically. We've been going out to a lot of one off shows by ourselves to meet up with the festival like the Download Festival and Lollapalooza.

Meghan: And how are you liking it?

Paul: It's great so far.

Meghan: Anything exciting happen so far? Any wild touring stories or anything?

Paul: Just today or in general?

Meghan: Just in general, although, if you have any from today, I would like to hear them.

David: Naw I mean, we just had a little time off in LA so that was nice because we've been on tour for the last three weeks now so ya know it was good to have a couple days off. I think we're all more tired from our days off than we are from the three weeks of touring.

Mark: We saw Suge Knight almost attack a motorist at a gas station.

Meghan: Are you sure it was Suge Knight?

Mark: Absolutely positive that it was Suge Knight.

Meghan: Did you ask him? Are you positive?

Meghan: He is a big guy.

David: He is unmistakable.

Meghan: did you ask for his autograph?

Mark: No, he was mad, he was very angry.

Meghan: He's an angry guy. It's not your fault, don't worry.

David: We saw the Melvins do an in-store at Amoeba music.

Meghan: Oh yeah, you guys don't have an Amoeba on the East coast?

Meghan: So you guys just released And You Were a Crow, right?

Meghan: Tell me a little bit about writing, recording, producing and what that was like.

Mark: We recorded it in North Carolina at Echo Mountain Studios with a producer by the name of Jacquire King and it was pretty amazing. We did over seven weeks in the mountains there of Asheville so it was really really cool. Jaquire did a great job, he really helped us out, brought the best of it out of us, we're extremely happy with what came out, the product we couldn't be happier with it. It's good to be out touring and supporting something we feel really strongly about.

Meghan: Was that new for you guys, working with a producer?

Mark: Yeah that was the first time working with a proper producer. We couldn't have had a better first experience than with him.

Meghan: Do you feel like it affected the way you recorded?

David: Definitely the way that we write together as a band, because that's how we've always done everything together as a band but Jacquire being kind of a sixth person in the mix really helped us listen to each other and focus more in on what we all collectively want and it comes across in the record but even more so now when we start writing new songs and stuff. We kind of learned a lot of lessons from working with him so it was a very very beneficial thing.

Meghan: Do you guys do a lot of writing on the road?

David: It's hard we haven't really gotten to.

Paul: We've really only had four days off basically, so far so it is a little tough but we are all definitely on the same wave length and we've begun individually working on stuff and the second we have a chance when we get home we'll come together and make it all happen.

Meghan: You guys got together 2004, is that correct?

Meghan: How do you feel like you've grown, progressed and changed since then?

Mark: I think over doing this record that we've learned how to write with one another and learn a lot about each other's strengths and weaknesses and just a lot about who we all are as individuals and that gives us a better understanding of what we want to be and who we are collectively.

Meghan: Okay, what would you say are some of your major influences?

David: They are very all over the place individually really, but we have a couple collectives. I know At the Drive In is one band we have all been longtime fans of, it has been an inspiration to us.

Sam: Lots of other bands Beethoven to Bad Brains and everything in-between.

Meghan: Good choice. Did you guys get a big New Jersey following before you went into the whole touring thing?

Mark: New Jersey and New York have been really good to us.

Sam: New York has definitely... I guess now at this stage we end up more in New York than in New Jersey, which isn't to slight New Jersey but there is just more venues...

Parlor Mob: Never, we love it.

Paul: A lot more people, everyone moves up to New York to go out every night to experience culture and art of the city so we play there two times a week and we have great shows.

Meghan: Do you guys have a favorite venue that you play in New York?

Meghan: Is there another city that you guys have loved besides New York? Any favorite city to play ?

Mark: Washington, we were just in Vancouver for the first time and that was awesome. Every city is becoming our favorite city.

Paul: We are completely unjaded yet so everything is new and exciting to us, every city. We've done one six week tour before this and the three week after that and everything is still very exciting for us. Portland was amazing...

Sam: We're at the level now where we're getting the friends in the actual cities, starting to come back and see the same people. It's getting more familiar.

Meghan: So you guys have crews?

Meghan: Good feeling. What would you guys be doing if you weren't touring with the Parlor Mob?

David: You can take our silence as your answer.

Meghan: A whole lot of nothing?

Paul: I'd be in audio engineering, probably.

Sam: I'd think we'd probably be touring with another band, with the same members and a different name.

Meghan: Like "What About Frank?".... So why did you guys change your name?

Mark: I think that name started as a joke before it was very serious and once we decided that this was going to become a nationwide thing and that we were really going to go for it that we wanted to go with something that would spark less questions that we didn't have answers to. Just something a little more serious.

Meghan: So here is a question that you might not have an answer to. Who is frank?

David: Frank was a close friend of ours and a long time ago he was scuba diving in the Caribbean and he went down too deep and he got sucked into the jet engine of a cruise ship and we never saw him again.

Meghan: Is that a true story?

David: Would we lie?

Meghan: I'm so sorry. That's a sad sad story and I'm sorry about that. Did he share any similarities with Bob of What about Bob?

Meghan: Not at all?

Sam: Although, that is a good movie.

David: Yeah, it's a great movie. 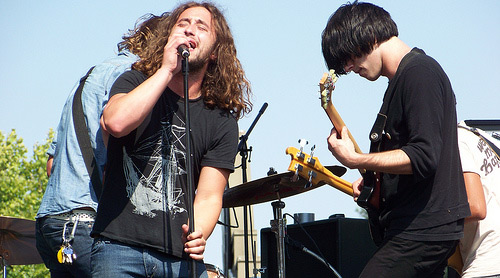