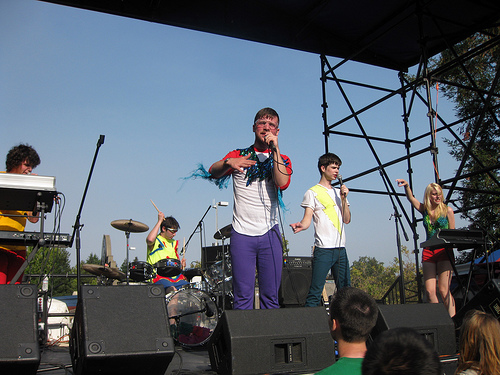 Natalie Portman's Shaved Head discuss their roots in Seattle, one starlets ill-advised brush with baldness and their facial hair aspirations.

Meghan: Can you guys introduce yourselves and tell me what you play?

Claire: I'm Claire and I bass, keyboard, and I sing.

Luke: I'm Luke and I sing and play guitar.

Liam: I'm Liam and I play the drums.

Meghan: You're all very multi-talented. That's impressive! Do you guys all playing instruments since you were little or is it something you kind of came into in high school?

David: For me I started playing guitar when I was a freshman in high school and then started dabbling in the key boards when I guess I joined the band and it was kind of thrust upon me.

Luke: It's kind of a pretty recent thing for most of us, play instruments, probably in high school is when most of us started.

Liam: I've been playing since I was nine

Luke: He's the drummer so he has to.

Meghan: You're the musical expert of the group?

Liam: I tried playing the guitar at age nine but they said I was too young.

David: He can play some wicked Rage Against the Machine

Meghan: What do they know?

Luke: The guitar teacher said I was too young. So I play drums.

Meghan: So where did you guys get the idea for the name?

Liam: Well? So who wants to take it? Someone else wanna...

Luke: It was back in the day like 2005 when news of Natalie Portman was shaving her head was all in the gossip magazines or whatever and we were in class one day in high school, we all were in high school together, and we had to pick a team game for a class game we were playing so we so we were like, "let's call ourselves Natalie Portman's Shaved Head," and it was kind of funny and people liked it so we had a little band that was forming at the time and we thought, "oh we can use that name" and it stuck.

Meghan: I like that. That's a good story. Are you guys all from Seattle? Right?

Luke: I live about twenty minutes south of a down called Des Moines.

Meghan: Out of towner! So I have to say I love the song Beard Lust, who wrote? Where was the inspiration coming from? Give me a little big of background on it because it is fucking amazing.

David: It was literally figuring it out.

Shaun: So we were sitting around the computer writing a song and the topic came to be beard.

Meghan: You've grown some impressive facial hair since then.

Meghan: Of course of course.

David: As you can see we are envious.

Meghan: I'm sure it will work out soon. You guys just released "Glistening Pleasure" right?

Meghan: Did you release it with a record label or is it kind of your own printing?

Luke: It's our own label but that's kind of a secret.

Meghan: I won't tell anyone I promise. We'll edit it. Do you guys do all the extra promotional stuff, sending out Cds and everything?

Luke: We're working in front of the scenes as well as behind the scenes.

Luke: You can do it in this day and age. It's pretty cool

Shaun: We've had some people that help us with promotion. We recently got a booking person so when we can we get some help, but other wise it's just us in the basement doing what we can.

Meghan: Do you guys all right write and help record? How does the creative process work?

Shaun: A lot of it starts from Luke and writing the groundwork and sometimes the majority of the song...

Shaun: Then musically when we bring it to practice or someone comes over and that goes from there. Just working on it and then somewhere in that process I come in and me and Luke think about lyrics for a really long time and try to think them out

Luke: What does the song want to say?

Meghan: what is this song about?

Luke: ... and then we try to interpret the song. It has a message and we are just the interpreters.

Meghan: What were some of the inspirations for Glistening Pleasure? Do you have any specific bands that you are into or sounds on the street or...

Claire: There are some of both. There of sounds off the street in that album.

Luke: We have bird sounds...

David: From Australia I think...

Luke: From Australia, some street sounds from Russia

Shaun: They are supposed to be from LA

Luke: But they are actually from Russia.

Meghan: You guys keep revealing these secrets to me.

Claire: Off the record!

Meghan: Have you guys met any of those guys?

David: Obviously we are from Seattle so Nirvana and I think that s a given, really. We listen to all of Nevermind before we play every show.

Meghan: I prefer In Utero

Shaun: Before there was any of them Mother Love Bone

Shaun: But they all suck.

Meghan: Are you guys excited to meet the bands who are here? Still a little star struck?

Luke: It's been really cool to wander around back stage and say, "there's the guy from Cut Copy," and "that's Yeasayer" I think they are over there playing basketball.

Meghan: They are cool guys you should go over there and hang out with them. They are nice people.

Luke: This is the first time we got to watch the bands perform from back stage.

Shaun: They usually don't let us back here in the big area...

Luke: But I can touch them! If I wanted to. I could run out there and tackle them and run back.

David: Things could get very interesting after that.

Luke: I was thinking about walking on with a Tambourine.

Meghan: If you are really gentle, they might not even notice.

Claire: Just look down and kind of play it.

Meghan: Play like nobody is watching. Have you guys done a big national tour yet or is this kind of like a big thing for you?

David: No. We are ramping up do that next week. We'll be leaving next Saturday, a week from today.

Luke: We are going to New York and back.

Meghan: You must be nervous! Are you nervous? I would be nervous.

Luke: we are really excited. We are touring with CSS, The Go Team, and Matt & Kim.

Meghan: This must be a big deal for you guys those are big name bands. Congratulations!

Luke: Yeah big inspirations to us.

Meghan: That's cool. And you get to make rock star friends!

David: Yeah that will be exciting.

Meghan: But you know only a couple of you can drink so you gotta keep it down.

Liam: Only one of us is legal.

Claire: There is one date in Canada.

Shaun: We only have a week to get fake Ids.

Meghan: You can make it work, I'm sure. You're rock stars now, you have money.

David: You would think it would be easy!

David: It is great to have you fans from all over the world in all fifty states of the United States and all countries everywhere.

Claire: Where ever you are it's great to have you!

David: It's great to have you.