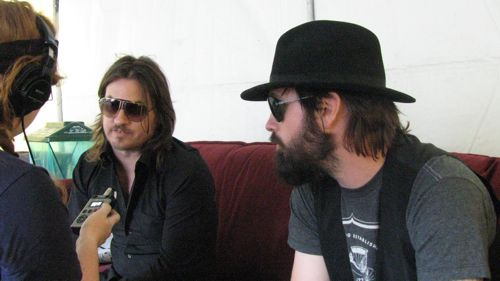 Louis XIV is waiting for me on a tacky red velvet couch backstage at Download Festival 2008. I kept Louis XIV waiting. Gulp. I rush over to the two semi-intimidating figures dressed all in black and apologize profusely for the hold-up. I check the levels on my recorder and we get to chatting. As it turns out, Louis XIV is from Poway, CA - birthplace of Blink 182, the Poway High School Titans and Brandon Call of Step by Step fame. I wonder aloud how they all met and subsequently wound up in Paris to record The Best Little Secrets Are Kept. Then it finally dawns on me to push the Record button.

Meghan: And how do you feel like moving to Paris affected your writing, recording relations?

Jason: well it made us not care about being accepted by anybody, because we didn't expect anybody to ever hear it. So I think that was helpful in just not caring what other people thought. It was about liking what we were recording.

Brian: And we were at a transitional period. Like Jason said, we we've been friends since we were little kids and we've played in bands all growing up. We were in another band for a long time and when Jason, myself and Mark grew in a separate direction we were just kinda looking for a way to be our own favorite band again, really. Just get excited about what we're doing and not really have any expectations or really consider the expectations of anybody. Just kinda be artists again and just get excited about music. So it was perfect timing.

Meghan: So you guys have been touring quite a bit lately if I'm not mistaken. Do you prefer touring to recording or recording to touring?

Brian: Both, no particular order really.

Jason: Yeah, they're different entities. Sometimes the tours you don't want ever to end and sometimes they never seem to end. I think in general I prefer to record. But once you get on the road you start really enjoying that and you know it's sort of like getting ready for a party. Sometimes you just want to lay around in bed, but once you actually get to the party you don't ever want to leave the party. That's sort of what touring is, I think.

Brian: We kind of balance each of them to the point when we're ready to do the next one. Making our last record we kinda drove ourselves to the point where, for our own good we had to get out of the studios. It was like, really almost a release to get back out on tour and play. But when that touring turned into 12 weeks non-stop we were ready to go back and record and now we're getting ready to head over to Europe for five, six weeks and do the whole tour over there in UK and Europe.

Meghan: Have you guys released Slick Dogs and Ponies yet?

Jason: Yeah. Slick Dogs and Ponies we released in basically February. So we're kinda touring that for the first time in Europe, now that record. We did three months so far in the United States and we've been recording now for the past month, month and a half since we've been back. Actually working on some stuff that I think, we all think are the best things we've ever done.

Meghan: So there's another album in the works, then?

Jason: Yeah. We do it ourselves.

Brain: we're always working on stuff. Whether it'll be an album or just release it.

Jason: we always record and produce the stuff and engineer everything ourselves and have our own studies. That's kinda what we do for fun.

Meghan: So do you feel like having your own studios and everything kind of gives you a freedom that's not warranted to other artists?

Jason: Yeah, I think it completely does. It allows us to not sounds like anybody else, too. To not be at the mercy of other people. And you know, if you're like a little kid and you wanna go play, you don't always wanna go to somebody else's room to play. It's nice to have your own toys and play with your own toys.

Meghan: That's a good analogy! Is Slick Dogs and Ponies as scandalous as The Best Little Secrets Are Kept?

Jason: No I think it's a much more mature record. It's a different record. I actually love The Best Little Secrets are Kept. It's nice to be a fan of your own stuff. We're not always fans of everything we do. But yeah, it's a different record. If the Best Little Secrets Are Kept was the party, this one is sort of the morning after the party. And then I think we're making a record now that will be getting ready to party again.

Brian: We've slept it off. Ate the aspirin, drank the water.

Meghan: What do you think influenced the change in your writing and recording style that's shown in Slick Dogs and Ponies?

Jason: Just life was different for the last several years. A lot more serious issues that we've dealt with in our lives. And it was a more reflective period. I think on The Best Little Secrets Are Kept, it was purposely more specific. Everything was meant to go to the same party. It was all meant to work together. Whereas Slick Dogs and Ponies is a little bit more over the map and more experimental. We didn't want to repeat ourselves. And so for better or worse we didn't repeat ourselves.

Brian: We definitely made a conscious effort to not repeat ourselves and to show other things we were into and other ways we could go. And it's a phenomenal record, we love it. It's just that we're not done touring on it yet and we're not done making records. It's a perfect stepping stone to where we can go and it's an exciting time.

Meghan: So I know you guys are probably a little tired of talking about this but tell me about Hoover, Alabama and the school board there.

Brian: They don't like us very well over there. You tell this one, you tell it better.

Jason: They were just scared. It was during Katrina, the first day that Katrina had hit. And we were actually at the VMAs playing a party there. It was in Florida, Miami. We were hanging out in South Beach I think it was our first time in South Beach, and we were excited to be there. And the storm started coming in. It was before anybody knew it was going to be such a horrendous storm. And anyway, the night before we were supposed to get in the bus or fly to Nashville and then from Nashville we were going to Hoover. Either way, we didn't want to get in a vehicle or a plane in what was the storm at that point. And we were sitting in our hotel room and the windows were swaying in and out. It was about the 18th floor or the 20th floor or higher and it was and we turn on MSNBC or CNN and all of a sudden there are people picketing our show. Our show in Hoover, Alabama. Which is like a small town a couple hours outside of Birmingham.

Brian: With a picture of our album and a circle and a line through it.

Jason: I actually love Alabama, I spent a lot of time in Birmingham and I love it. But basically the PTA thought we were too suggestive and they were worried we were going to have sex with the daughters and the sons. It was weird, it was laughable at that point because there had been so much stuff that had been written about us that was like we were racist, that we were misogynistic that we were these horrible people just because we made an album that didn't shy away from being flirtatious. Especially in such a serious sort of indie rock world, I think it scared a lot of people. I think in hind-sight now it influenced a lot of people. But at the time it was very taboo. It's very strange because just afterwards, I think it was snoop dogg played at the same place we were gonna play. And I know Snoop's said some things that are far worse than us. It was very interesting. I looked at it in some weird way as somehow a weird backhanded racism because there was something very strange about it. It was laughable, you know. We actually liked it; I called up my mom first thing and was very excited to tell her about it.