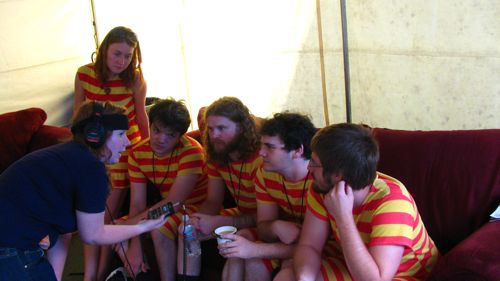 Meghan: This is Meghan interviewing De Novo Dahl at Download 2008. Why don't you guys introduce yourself and tell me what you play.

Mixta: I'm Mixta Huxtable and I play the drums.

Meghan: So how did you guys all meet?

Meghan: It seems to have worked out really well for you guys.

Keith: We're all swingers but this is our main thing.

Meghan: So you're not tied to each other but you spend a lot of time together?

Keith: It's an open relationship.

Meghan: That's good, I hear those are really healthy, generally. How did you really meet though?

Keith: Well, I was a fan. I joined the band after they had already been established. I met him (gestures at Joel) because he was dating some girl I went to high school with.

Meghan: Ah, so are you guys all high school buddies or kind of knew each other through the same music scene?

Meghan: And you guys are from Milwaukee, you mentioned?

Meghan: Right, the big country capital of the world. So how does that effect your guys' music, production, writing? That sort of thing?

Moose: I don't think it does.

Meghan: Not even a little bit?

Keith: I think it does in that Nashville is filled with very talented musicians and bands. And it kind of pushes you to be better, in that way. Competitiveness. As far as country music, I don't think we're particularly influenced by it.

Meghan: I scoped your website out a couple days ago and I noticed you guys have those really nice uh... I guess you could call it bling?

Meghan: Not the Nudie suits. The country western suits?

Meghan: I love what you're wearing now, though. The stripes are really nice. So you guys just recently released Move Every Muscle, Make Every Sound, right? Can you tell me a little bit about recording, writing, producing?

Joel: Well, we used to be a six piece band and we lost three members all at once. Within a couple weeks. And that kinda forced us to go into the studio and work on new material, immediately. It was a combination of songs that we had already been working on, songs that were being written for other projects and songs that we wrote after the fact to put on the record. They were kind of the last batch of recording we did.

Meghan: So do you guys all write together?

Meghan: I like that. Because you're swingers, I hear. Is this one of your first national tours?

Keith: We've been on a few. We've been out to the Bay Area a few times. We were on tour with Hot Hot Heat like 8 months ago. We played the Fillmore. We were out here a few weeks ago with a band from Michigan called Tally Hall. The last year or so we've toured a lot.

Meghan: Do you enjoy touring or are you more of a studio band?

Keith: I prefer playing live, but that's just me.

Mixta Huxtable: I definitely prefer being in the studio and writing.

Meghan: Do you feel like you progress more as a band on stage or when you're at home recording?

Joel: We don't work on new material on the road very much.

Meghan: "We don't like change," is that what you're trying to tell me?

Keith: We use the road for working on our dance moves and choreography.

Meghan: And it's clearly working out pretty well for you guys.

Joel: You might notice us in Justin Timberlake's new video as his back-up dancers.

Meghan: I haven't seen it yet but I'm going to go Google it. So are you on a major label now or who are you recording with?

Moose: It's a major what?

Mixta Huxtable: I said it's a major crap label!

Meghan: You know I'm going to call them as soon as I'm done here. So you best behave.

Mixta Huxtable: I'm just kidding! It's not bad. It's not a bad thing.

Joel: I think that most record labels are pretty much the same.

Meghan: And how did you guys get picked up with them? Did they just see you at a show?

Joel: They heard one of our songs posted to a blog called YouAintNoPicasso.com. Liked the song, myspaced us, asked us about ourselves. We thought it was all kind of BS at first but one thing led to another and we ended up signing with them.

Keith: That's the public story. The true story is they found us on Match.com.

Meghan: You guys should wear Match.com t-shirts when you go on. Since you're obviously really big supporters of them.

Keith: If they stop charging me for my account maybe I would.

Meghan: You should talk to them about that.

Moose: I think I speak for everybody in the band when I say that I think we all prefer to regularly go on little trips out around the area and all that rather than several months at a time. As for playing in Nashville, we play there somewhat infrequently just because there we have a really concentrated following. Our focus is trying to expand our fan base into a wider range, nationwide.

Keith: I like playing in Nashville because I can be pretty sure I'm not going to share a bed with Joey at the end of the night.

Moose: I like playing in Nashville because I am pretty sure that I'll share a bed with Joey at the end of the night.

Meghan: So how did you guys get the name De Novo Dahl? Where does that come from?

Mixta Huxtable: It's kind of a long Ouija board story.

Meghan: It sounds like a good Ouija board story, though.

Mixta Huxtable: Only if you like demonic spirits giving you your band name.

Meghan: I haven't decided yet.

Moose: See, the name De Novo Dahl, a lot of times we go around and say "It's a reference to Roald Dahl." We don't want to stir things up too much. But for the SomaFM exclusive it's actually from the Necronomicon. It's part of the chant they used to summon me to replace the previous keyboard player. They thought they needed an edge so they made a deal with the devil and here we are.

Meghan: Ok so Match.com and deals with the devil seem to be working out for you guys.

Keith: Any questions that we have?

Mixta: For the fans? For the listeners?

Meghan: No, just in general. Is there a crazy touring story? Something that happened in the studio you'd like to share?

Mixta: I mean, in general. Not enough people are comfortable with their own dance moves to take them out into public.

Meghan: I foresee a dance lesson during your set, right?

Mixta: There should be more dancing. Period. Around the world.

Moose: More celebrities should be dancing. On TV. Stars.

Keith: When you're dancing, you're not fighting.

Moose: Unless you're dance fighting.