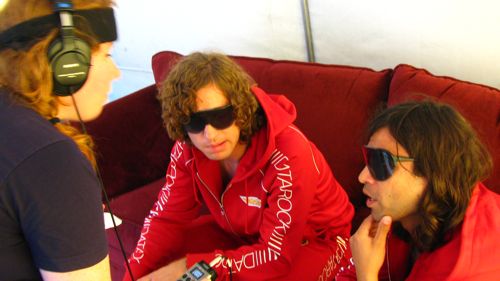 Meghan: Hi this is Meghan with SomaFM we're doing a live interview with Datarock. Hi guys, how ya doing, how are you?

Meghan: Could you introduce yourselves and tell me what you play?

Freddy: Inspired by the first releases of Kraftwerk where they use the flute.

Meghan: Great! Did you guys come all the way out from Norway just for the show today?

Freddy: Yeah we flew in from Bergen, Norway yesterday. So we're kind of, you know, It's a 9 hour time difference now so its...

Meghan: Wow! You guys look pretty good for being jet lagged. So you're okay

Freddy: Thank you, well we went to the spa.

Meghan: That's good. Ha ha. So first question, how did you guys come up with the sweat suits that you wear?

Meghan: So you guys are just the puppets and they're the puppet masters?

Freddy: They're the puppeteers.

Meghan: That's cool. How's that working out for you? Do you like it?

Freddy: They don't pay us anything because they know we're such huge fans of Devo so they can make us do anything. It's working out well.

Meghan: That's good. You guys just recently released an album, Datarock Datarock, right? How is that working out for you? Did you enjoy recording it?

Freddy: Yeah it was a lot of fun recording it. It didn't take a lot time to be honest to record it. It's insane you make an album, spend some time in a studio back home in your own little town, and that album takes you to 31 countries all around the world.

Freddy: It's pretty insane. We've done so many concerts because of that album. I'd say more than 400 shows.

Meghan: And you guys have been all around the US too, I saw you at Coachella this year.

Freddy: Yeah we just came back from a tour of 35 cities in the US. We came back two weeks ago and now we're back here.

Meghan: Are there any plans in the works for another album any time soon?

Freddy: The first thing is probably going to be released in November and the name of the song is probably a song called True Stories.

Meghan: We'll have to look for it!